Be Bear Aware: Tips for Living in Bear Country

Winter is coming! While you’re preparing your home and yard for the cold season, keep in mind that wildlife is doing the same. Bear sightings are much more common in the fall when fruits and berries become scarce in the higher elevations, and normally shy and solitary bears venture into the valleys in search of food. It’s more important this time of year to be bear aware. 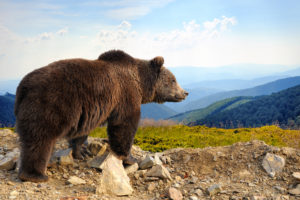 We all live, recreate, and hunt in bear country, and it’s probable that we will encounter a bear at some point. Though bears generally avoid humans, they are more likely to venture into camps and towns when they are actively foraging for food in the fall. Once a bear has become habituated to humans – when they associate homes and camps with a food reward – they become bolder around people, and encounters are more dangerous. With a few precautions, you can keep local bears from becoming habituated and reduce your chance of a bear encounter.

Keep bears away from your home 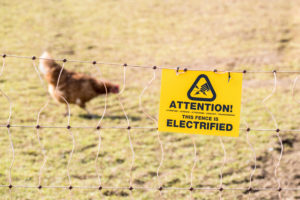 Bears are attracted to your home by the smell of food. Even things that we may not consider palatable – like compost and garbage – smells like a smorgasbord to a hungry bear.

Your best defense against a bear encounter is vigilance. Montana is bear country, so always be bear aware! Learn to recognize signs of bear presence: tracks, scat, carcasses, and clawed trees can give an indication of when a bear was in the area. Here is a good guide to identifying bear signs.

Bears try to avoid human encounters, so if they see, smell, or hear you, they will likely leave the vicinity before you even realize they were there. On a windy day, though, it is more difficult for a bear to sense your presence, and thus more likely that you may startle him. Always hike in groups, carry bear bells, and don’t be afraid to talk loudly and clap your hands. 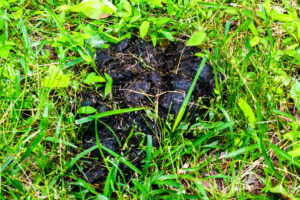 Keep away from “blind” areas. If you are hidden in the brush, behind trees, or around the bend in a river, not only is it difficult for a bear to sense you, but it’s also hard for you to sense the bear. Keep to trails and open areas.

Always carry bear spray! Remember, bear spray is regulated by the EPA, and has a lower concentration of oleoresin capsicum (the “pepper” of pepper spray) than self defense spray. Studies have shown that bear spray is very effective at reducing the number of bear attacks in national parks. Keep your bear spray in an easily accessible place like a hip holster when hiking.

The more time you spend in bear country, the more likely you are to have an encounter. Be mentally prepared for an encounter before it happens, so you can react calmly and correctly.

If you see a bear, but he doesn’t see you, leave the area quietly. If the bear is preventing your retreat along a trail, do not try to frighten it away. Wait calmly and quietly for the bear to leave.

If the bear is aware of your presence, do not make eye contact, and do not try to frighten the bear. Speak calmly and quietly and back away slowly. Do not run or make any sudden movements. You cannot outrun a bear.

In the unlikely event that a bear charges you, use your bear spray. Even if you are armed, do not shoot! A misplaced shot can make a bear more aggressive. EPA approved bear sprays create a fog of noxious fumes and do not need to be aimed precisely. Bears are unlikely to continue a charge after they have been sprayed.

When using your bear spray, aim low and towards the charging bear. Wildlife experts recommend shooting at least a six second spray when the bear is no less than 25 feet away. When the bear stops to clean itself, retreat quickly and alert Fish, Wildlife, and Parks.

Camping in bear country takes careful planning! Bears that invade campsites and picnic areas are attracted to the smells of food, so it’s important to keep all foods and “smelly” items in bear-proof containers or in your vehicle. If you are backpacking, come prepared with a rope-and-pulley system to hang your foodstuffs at least 100 yards from camp. Your food should be 10-15 feet from the ground, and at least 4 feet away from the supporting structure (don’t forget, bears are amazing climbers). 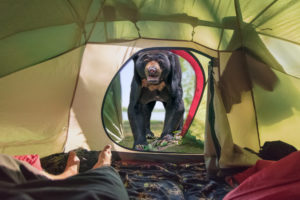 Don’t just hang food! Keep your dishes and utensils, garbage, toothpaste, creams and lotions hung up and away from your camp at night. Do not allow your sleeping bag or tent to become contaminated with the smell of food: wear one set of clothes to cook in, and include that in your hanging bag. Wastewater from bathing and washing dishes should also be disposed of at least 100 yards from your camp.

Keep it clean: wipe down table surfaces after eating to further reduce food smells. If you pack it in: pack it out. Do not bury garbage or other waste: carefully package in plastic zip bags, and carry it out with you.

Hunters and bears both travel in areas away from human habitation. Because hunters are making an effort to keep quiet, it is easier for them to startle a bear in the wild. It is important for hunters to be aware of bear signs, and to act accordingly.

If you have seen a bear in the area where you hunt, make sure to pass that information on to other hunters. And don’t be afraid to ask around!

Dressing game in the wild can be particularly dangerous. Like Pavlov’s dogs, bears can be attracted to the sound of gunshots: they have learned that where there is gunfire, there is often a carcass or a gut pile. If you are dressing game, be sure to remove the carcass as quickly as possible. Always use gloves and an apron when dressing game, to prevent the meat smell from contaminating your clothing. Wash knives and saws carefully and store them with the carcass.

Keep gut piles at least a mile from campsites, picnic areas, parking lots, or homes. If they must be moved, drag them on a tarp to avoid creating a trail that the bear can follow to you.

If you are at hunting camp, don’t store the carcass near your camp! Like any other food item, the carcass must be hung at least 100 yards from camp, 10-15 feet from the ground at its lowest point, and 4 feet from the supporting structure. Store the carcass in an area that you can see from a safe distance. When you return to retrieve it, observe it carefully to make sure no wildlife is present, move slowly, and make noise while approaching. Talk loudly, clap your hands, or whistle.

If a bear has claimed your carcass overnight, do not attempt to frighten it away. Surrender the carcass to the bear, and alert Fish, Wildlife, and Parks. You may be able to get a new tag.

Remember: a fed bear is a dead bear. A bear that is attracted to humans is more likely to be aggressive towards humans, and will require relocation or euthanasia. Share this information with your friends and neighbors to keep both humans and bears stay safe!